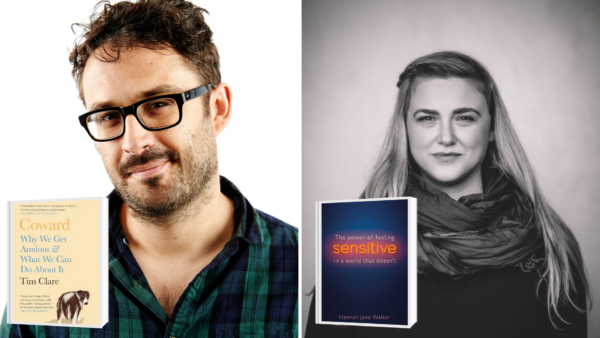 Hannah Walker is a very sensitive person. Like many, she was conditioned to believe this was a weakness she should overcome. Tim Clare has suffered from anxiety for over a decade. He promised to try every method and medicine he could to get better. Between them they have published and performed poetry, theatre shows, YA fantasy fiction, and award-winning memoir – now they’ve written about their own mental health journeys. But what have they discovered?

You can copies of Sensitive and Coward from our official festival bookseller DRAKE the Bookshop.

Hannah Jane Walker is a very sensitive person, along with at least a fifth of the population. Like many, she was conditioned to believe this was a weakness and a trait that she should try and overcome.

When she had her first child and realised that her little girl was sensitive too, Hannah decided to find out whether sensitivity might in fact be a positive trait. Her question led to some fascinating answers and ongoing research that suggests survival and thriving is not only limited to the fittest, but to the sensitive.

If you are someone, or know someone who sat at the edge of the party as a child, or waits to be sure about what you want to say only to never get a word in, or jumps at loud noises, or worries that you cry so easily at a beautiful piece of art, or that you just seem to feel so much (too much), this book reveals the strengths in these traits and also how we need to embrace them rather than be embarrassed by them.

People who are highly sensitive are highly caring, they are observant and notice new ways of doing things in difficult circumstances, they are able to follow their gut instincts (a real, scientific thing), they bring teams together, they listen well and are far more resilient than we’ve often been led to believe. The problem is that in today’s noisy world, they often suffer from lower self-esteem and confidence levels.

In Coward, Tim Clare explores all the possible treatments for anxiety, from SSRIs to hypnosis, running to extreme diets. He interviews experts and becomes a guinea pig, testing their methods on himself. At the end of a year of many ups and downs, Tim discovers what helps him (and what doesn’t), and what might help others. Most of all, he comes to rethink anxiety and encourages all of us to do the same.