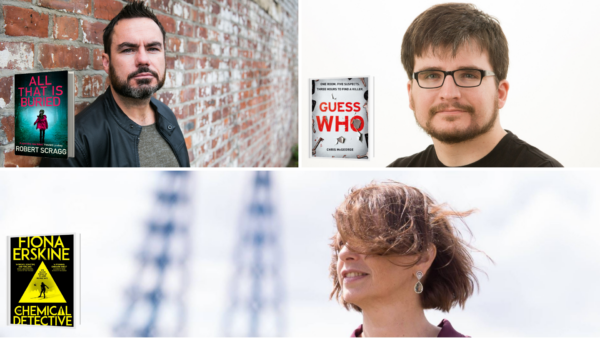 Bodies in the Library

A thrilling evening with readings and conversation from three members of the Northern Crime Writers Syndicate – Fiona Erskine, creator of the Chemical Detective novels featuring Dr Jaq Silver; Golden-Age-influenced Chris McGeorge; and Robb Scragg, author of the Porter & Styles series, and winner of the 2021 Lindisfarne Prize for Crime Fiction.

Get free tickets for this event with every booking of The Plot Is Murder on the Tees.

Buy your copies of The Chemical Detective, Now You See Me, and All That Is Buried, from our official festival bookseller DRAKE the Bookshop.

About The Chemical Detective:

While working on avalanche control in the Julian Alps, she stumbles across a delivery mix up in a consignment of explosives.

After raising a complaint, she is warned, threatened, accused of professional incompetence and then suspended. Taking her complaint to Zagrovyl head office in Teesside, she narrowly escapes death only to be framed for murder.

From the snowy slopes of Slovenia, to the wreckage of Chernobyl, Jaq must fight for her innocence, and find the truth, before it’s too late.

At eleven years old, Morgan Sheppard solved the murder of a teacher when everyone else believed it to be a suicide. The publicity surrounding the case laid the foundation for his reputation as a modern-day Sherlock Holmes. He parlayed that fame into a gig as TV’s “resident detective,” solving the more typical tawdry daytime talk show mysteries like “Who is the father?” and “Is he cheating?”

Until, that is, Sheppard wakes up handcuffed to a bed in an unfamiliar hotel room. Around him, five strangers are slowly waking up, as well. Soon they discover a corpse in the bathtub and Sheppard is challenged to put his deductive skills to the test. One of the people in the room is the killer. He has three hours to solve the murder. If he doesn’t find the killer, they all will die.

An ingenious, page-turning debut, Chris McGeorge’s Guess Who matches the high-wire plotting of classic “locked room” mysteries into the unstoppable pacing of the modern-day thriller.

About All That Is Buried:

A parent’s worst fear is realised when seven-year-old Libby Hallforth goes missing at a funfair; no witnesses, no leads, and no trace. Months later, after the trail for Libby has gone cold, DI Jake Porter and DS Nick Styles find human remains but that’s just the tip of a gruesome iceberg. Everyone is a suspect, nobody can be trusted, including the Hallforth family. The chances of getting justice for Libby are fading fast, along with Porter’s chances of stopping a killer before they strike again.